I’ve been training for the Hackney Half Marathon and have been enjoying the chance to be alone, to explore the canals, rivers, back streets and parks of the city, and to think. The more I run, the more I’ve been thinking about the limits of my freedom as a runner, or indeed walker of the city. I’ve been thinking about the subtle, yet still powerful, ways our movements and interactions are being managed and planned.
These frustrations first surfaced in the countryside, during a run in the Forest of Dean in Gloucestershire where I grew up and my parents still live. I was looking forward to escaping the confines of the towpaths and to being immersed, perhaps even a little lost, in woodland. So I dug out my Dad’s Ordnance Survey map and traced a route I cycled as a teenager along the old Severn and Wye railway line.

But I could have been spared this effort. It turned out that Pedalabikeaway, the local cycle centre, had come a long way since I lived in the area and now offered hoards of Lycra-clad men a variety of colour-coded, skill-sorted, time-tested, effort-planned routes around the Forest. Once I had parked, signs informed me that the ‘Family Cycle Trail’ followed a similar route and showed in precise detail how far I would travel, how long I would be away and how much effort I would expend.

And that information kept coming. Large yellow signs (a far cry from arrows on small wooden posts) regularly updated me, right down to the number of minutes it would take to get back. I was disappointed that I was compelled to look at each sign and waited for the next one to appear. Once I got back, I remembered the experience more as the completion of a route than a morning in the woods. 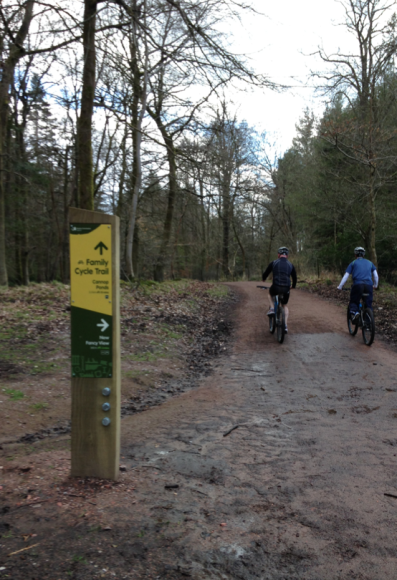 One of the smaller trail signs

Some of my best memories in the Forest were of getting lost, retracing routes, asking strangers for direction, discovering the unexpected, or finding a phone booth to call my parents for rescue. Could this be possible now if all options are engineered? Even if cyclists fancied going off-route, these diversions were carefully marked out and each given a name to describe the ‘skills’ it would test.

And this was supposed to be my break from the tyranny of constraint in the city. Here it’s much worse of course. We press buttons to gain permission to cross roads; we retreat to pavements and quiet pathways to escape traffic; we become a blue dot pulsing on a smartphone app; our trajectories mapped out ahead of us as a colour-coded line, ready to change if any surprises get in our way.

I understand that we need routine, structure, signs and signals to help us negotiate the complexity of urban life. I also realise that information helps. I remember terrifying taxi journeys when I first arrived in London when I didn’t have a mobile phone, let alone Googlemaps to tell me that I was indeed travelling home and not to my death. Transport for London’s Legible London signs (pictured above) were designed to encourage walking in the city. And I appreciate that the Forestry Commission has to cleverly manage the impact of cycling on the Forest, which means planned routes are necessary.

I also appreciate that a few friendly signs are nothing compared to the increasing power of CCTV, uniformed guards and rules in today’s public spaces. After all, it’s not hard to ignore a sign and follow our own paths.

But that doesn’t mean these subtle forms of control have no influence. Economic geographer, John Allen’s analysis of the Sony Centre in Berlin’s Potsdamer Platz (2006) offers an interesting exploration of a related subject. He shows how urban planners use the layout and design of this public space not necessarily to manipulate, but to seduce, “offering choices around movement and patterns of interaction, yet at the same time limiting those very same movements and interactions in broadly scripted ways”.

My route around the forest was certainly scripted, as are my runs along the Regent Canal where Legible London signs reveal not only where I will be in five or fifteen minutes, but all the temptations I’ll see along the way. I am concerned that this desire to script public spaces erodes our capacity for surprise, innovation and novelty. I’m not calling for the death of signs, but I wonder whether we could be trusted with a little more wherewithal, a little more intelligence to mark our own paths, our own directions.

But we also need to take control ourselves, to switch off in order to lose ourselves a little. I plan to do just that … once I’ve logged my routes via my GPS-enabled running watch, recorded my speed, traced the Hackney Half Marathon route and beaten my personal best … I promise.

Those who have read my previous blogs might argue I’m contradicting myself here. Surely any traffic filtering scheme is another form of control, another script. I agree and would prefer people relied on instincts rather than engineering tools to make roads safer. The trouble is that our streets were designed with freedom in mind, but solely in terms of the freedom of auto traffic and not other road users. To reverse this imbalance perhaps we need to take more drastic steps in order to demonstrate how streets might look as social spaces rather than engineered spaces for movement. Road closures might be too heavy-handed, but I’d like to test them to find out.