Since I posted my first blog there has been some interest in my links to the campaign supporting potential road closures in London Fields (my only link is Claudia Draper who spoke at the pro-road-closure meeting  in February and who helped me set up a play street last year). So I thought I’d add some detail about why I’m interested in a scheme that challenges the domination of cars in streets.

Last year I completed a MSc dissertation looking at play streets, where residents occasionally close their streets to cars for play. I wanted to investigate how far this model could lead to a long-term shift in actions and perceptions of the street.

My research soon revealed the difficulty in shifting those perceptions. Cities for too long have been designed around auto traffic and car drivers assume it’s their right to use the most direct and fastest routes. I have heard residents in E8 expressing fears about becoming ‘prisoners’ in their homes if the council did close roads to through-traffic (even though they would still be able to access properties, albeit on slightly longer routes). It is as if some prioritise freedom to drive over freedom to walk or cycle on streets.

Historical accounts have revealed how the car won its enviable position as king of the street. As historians Clay McShane and Peter Norton have shown, the automobile’s dominance was not inevitable or the natural order of things, but the result of a hard-fought campaign by the auto world through the media, law courts and school safety campaigns pre 1930. Their aim was to create a social change and turn the car from a symbol of death into a symbol of freedom. 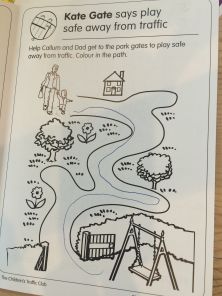 And they won. Even those not in cars are convinced that the street is not for them. Consider all the traffic engineering equipment that teach us to keep away from the road, safely waiting at traffic lights or on pavements. Consider the school safety campaigns that encourage children and parents to hurry along streets, or the chilling road safety adverts that blame careless pedestrians, rather than automobiles, for not heeding dangers on the road.

This is why I’m encouraged when I see cities bravely challenge the status quo by prioritising other road users. I noticed, with interest, plans to close the Seine to auto traffic in Paris and the mayor’s comments that the time has come to assume a decline in auto traffic. After all, there are estimates that cyclists will outnumber car drivers entering central London in the next few years.

I’m also encouraged by success stories in Strasbourg, Copenhagen, Wolverhampton, Cambridge and Vauxhall Cross as examined in this European Commission report. The Enjoy London Fields group has also uploaded some video case studies here, some of projects in residential areas. I realise there are differences but there are some lessons to be learned.

In each case, there was fierce opposition and a belief that idiosyncrasies would prevent the concept from working. But in each case, travel chaos did not materialise and a proportion of traffic disappeared.

Of course, it’s possible that road closures might not work in this area and I agree that other city locations might benefit even more from road closure schemes. I also appreciate concerns that traffic will be displaced onto neighbouring streets and increase pollution in school playgrounds.

But if road closures could lead to an overall reduction in traffic volumes and if these closures set in motion wider changes that reduced traffic on neighbouring streets, then I believe they are worth testing. I just can’t see how doing nothing is attractive to those who want to reduce pollution levels in the area.

I’m not in complete opposition to cars and understand they are (just one) part of the life of a street. I also acknowledge that other measures that reduce auto traffic are also critical. Vehicles need to be more fuel efficient; we need to move to a system of car sharing and not car ownership; cities need to improve public transport; and design roads that encourage slower and more careful driving behaviour (the list goes on).

But what’s appealing about the London Fields road closure concept is that it is so contentious. In being so it encourages debate and it conspicuously and quickly tests an alternative. Conversely, by doing nothing, don’t we run a greater risk by telling society that the car should endure as king?

5 thoughts on “London Fields traffic: why testing alternatives is essential”